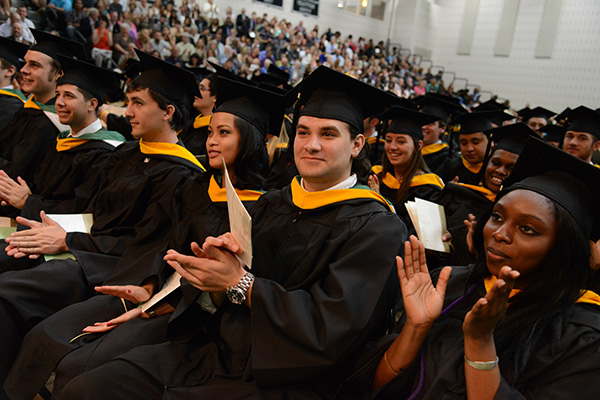 Stevenson University will graduate the largest class in the school’s history this spring when 550 students receive their diplomas at Stevenson’s 61st Commencement, Friday, May 9 at the University’s Greenspring gymnasium.

Delivering the keynote address to the record field of graduates will be Baltimore-raised Byron Pitts, a multiple Emmy-award-winning journalist and current Anchor and Chief Correspondent for ABC News. Pitts covers national news stories and in-depth features for the network, reporting for all broadcasts and platforms including Good Morning America, World News with Diane Sawyer, Nightline, This Week, and 20/20.

Get Everything You Need to Know About Commencement

A news veteran with more than 20 years of experience, Pitts has traveled around the world to cover some of the biggest news stories of our time from the Florida Presidential recount to the tsunami in Indonesia. Less than 24 hours into his tenure at ABC News, Pitts participated in live special coverage of the Boston marathon bombing investigation, including the day-long manhunt for the perpetrators.

The University will also recognize Nancy Gianni, the Founder and President of GiGi’s Playhouse, with Stevenson’s fourth annual Social Entrepreneurship Award. Gianni came up with the idea to build a positive center for children with Down syndrome after her daughter, GiGi, was diagnosed with the disorder. Now, there are 16 Gigi’s Playhouses nationwide and in Mexico where thousands of individuals and families participate in free educational and therapeutic programs. Voted “Chicagoan of the Year” in 2008, Gianni is a recognized authority within the Down syndrome community and a sought-after speaker on the topics of Down syndrome, team building, grassroots organizing, marketing, and fundraising.

Both Pitts and Gianni will receive an honorary degree of Doctor of Humane Letters, Stevenson University’s highest academic honor.

“Stevenson University is both privileged and excited to host Byron Pitts as its Commencement speaker and Nancy Gianni as its Social Entrepreneurship Award recipient,” said Kevin Manning, Ph.D., President of Stevenson University. “Both Byron and Nancy faced distinct instances of adversity in their lives and worked tirelessly and creatively to overcome them. Each will be a tremendous inspiration for our graduating students.”