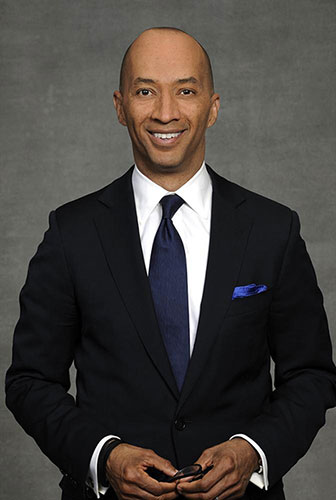 Baltimore-raised Byron Pitts, a multiple Emmy-award-winning journalist and current Anchor and Chief Correspondent for ABC News, will be the keynote speaker at Stevenson University’s 2014 Commencement, Friday, May 9. Pitts covers national news stories and in-depth features for the network, reporting for all broadcasts and platforms including Good Morning America, World News with Diane Sawyer, Nightline, This Week, and 20/20.

Pitts, a graduate of Archbishop Curley High School in Baltimore, dreamed of becoming a journalist at a young age, but he faced two serious obstacles to his dream: He was illiterate until the age of 12 and struggled to overcome a stutter.

“Stevenson University is both privileged and excited to host Byron Pitts as its Commencement speaker,” said Kevin Manning, Ph.D., President of Stevenson University. “His overcoming of adversity at a young age and his educational and career success that ensued will be a tremendous inspiration for our graduating students and their families.”

A news veteran with more than 20 years of experience, Pitts has traveled around the world to cover some of the biggest news stories of our time from the Florida Presidential recount to the tsunami in Indonesia. Less than 24 hours into his tenure at ABC News, Pitts participated in live special coverage of the Boston marathon bombing investigation, including the day-long manhunt for the perpetrators.

Prior to joining ABC News, Pitts spent 15 years at CBS News where he served as Chief National Correspondent for The CBS Evening News and filed regularly for 60 Minutes, covering presidential campaigns and political conventions, the wars in Iraq and Afghanistan, Hurricane Katrina in New Orleans, and the devastating earthquake in Haiti. He was also one of CBS News’ first reporters at Ground Zero during the terror attacks on 9/11, winning an Emmy Award for his coverage.