The Role of STEM Education in the Automotive Industry 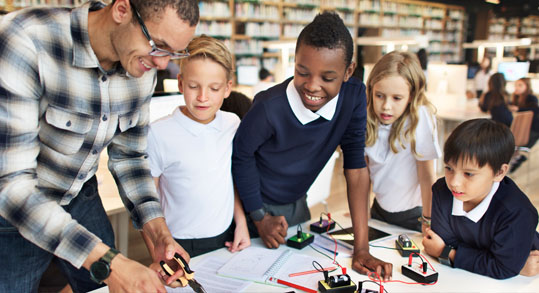 From its inception in the 18th Century, the automotive industry has generated billions of dollars in revenue. Since then, there have been numerous advancements not only in available technology, but also education and knowledge regarding such technology. The knowledge in engineering and technology has enabled pioneers in the industry to utilize these tools and advance the field. STEM education plays an important part in the automotive industry, from creating effective engines to vehicle body shapes and aerodynamics.

The most common type of engine is the internal combustion engine, which was first fully developed in 1876 when German Inventor Nicklaus Otto made the first four-stroke engine. This type of engine overshadowed the power of steam engines, and was adopted in smaller automotive such as cars, as opposed to large locomotives that were steam powered. The blueprint for the idea stemmed from French engineer Alphonse Beau de Rochas, who is responsible for originating the concept, but did not bring it to life. Such collaborative effort is akin to classroom concepts that are emphasized in STEM-centered classes, as working together in order to achieve a desired result has potential to yield more than individual effort. To be able to research and develop advanced mechanisms, one must have a solid foundation in engineering, which is one of the key STEM components. Another component of STEM is mathematics, which is linked to engineering in many ways. An example of math and engineering working hand in hand is the principle of engine horsepower and engine control units. Horsepower is a measurement of engine performance, and has many ways it can be calculated, depending on the intention of the car manufacturer. In order for an engine to function effectively according to how it has been built, its Electronic Control Unit (ECU) has to be programmed perfectly to ensure optimal performance and to avoid mishaps.

There are various ways to maximize fuel efficiency and vehicle performance, and some of these approaches were discovered by deviating from the typical path. One such example is electric and hybrid vehicles. While fuel such as coal, diesel, and gasoline are the primary resources used to powered vehicles, battery-powered vehicles have slowly crept into the pictures. While electric vehicles may seem like a modern discovery, they have existed since the 1800’s. Since their inception, electric cars have been only gradually increasing in both production and popularity. This is mostly due to their different shapes and appearances than their traditional gasoline-powered counterparts. In July 2017, car manufacturer Volvo announced that its “entire lineup will either become electric or hybridized by 2019.” This move highlights not only the recent growing popularity of electric vehicles, but the increased demand for environmentally friendlier vehicles. STEM education plays a crucial role in such endeavors, because companies and individuals must be aware of how to effectively minimize vehicle emissions and the impact of cars on the environment on a scientific level.

Master of Arts in Teaching at Stevenson University Online

Although STEM has four separate branches, they all work hand in hand with each other, often overlapping. Science areas such as physics heavily utilize mathematics. Engineering utilizes these sciences, and through such, can bring about new technologies. An emphasis in STEM areas is important in education because technology is only getting more and more prominent and advanced.

The ability to implement and understand these technologies can go a long way in pushing civilization further and improving how technology can be used to maximize quality of life. Stevenson’s Masters of Arts in Teaching (MAT) program promotes the opportunity for math and science baccalaureate degree graduates to educate young minds and create solid STEM foundations for middle and high school students.