The Process of Investigating Arson 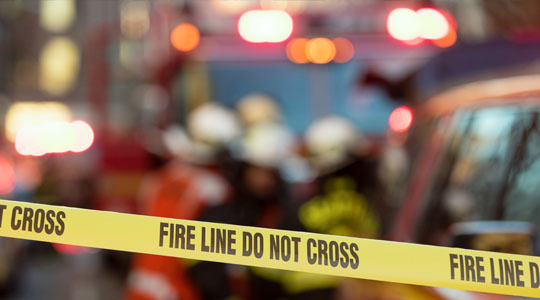 When investigating a crime scene, even the slightest detail can make or break a case. Crime Scene Investigators and Analysts comb through scenes for DNA, fingerprints, and different forms of residue- all which are integral components of the investigative process. Finding evidence that can lead to the origins of a crime is difficult enough, but when the crime at hand is arson; extra care, attention to details must be done in order to solve the case. Because of the destructive nature of fire, evidence may be hard to come by, meaning that investigators must analyze this with extreme vigilance. There are several steps in the process of investigating arson, from arriving at the scene until the investigation has been completed. The National Institute of Justice (NIJ) created an online resource, titled “A Guide for investigating Fire and Arson;” a five step process that frames the procedures that law enforcement agencies follow in the case of arson.

Step One: Arrival at Scene

According to the NIJ article, “While approaching a fire scene, first responders should observe and mentally note the following conditions and activities and initiate permanent documentation of the information.” There are a number of things that need to be assessed at the scene of the crime, such as any visible victims, the damage caused by the fire, and any witnesses or bystanders. Anything identified in this initial stage can contribute to the investigation, no matter how small the detail. Small observations can begin to lead investigators on the right path and give them hints as to whether a fire was caused intentionally or by forces of nature. In terms of an outright attack, the article warns responders to be wary of “incendiary or explosive devices.” It is also important for responders to consider and be aware of any flammable devices within a building, such as gas canisters or electronics that may explode. Once responders have assessed the scene, they can then act appropriately in advancing the situation, whether that may be putting the fire out, removing civilians from the building, and ensuring the environment around is safe

Once the first responders have contained the situation, Investigators “should meet with the incident commander and first responders to assess previous events and the current status of the fire scene, make introductions, identify essential personnel, and determine scene safety and integrity issues.” In following these steps, investigators will be informed about the scene and situation, and will be able to proceed with the investigation. The article states that “The investigator should determine the identities of witnesses and conduct interviews.” This aspect is important because witnesses can give key insight into any individuals who may have fled the scene, when the fire started, and what was happening during the fire. During the evaluation phase, caution tape is placed around the designated scene area, blocking it off from the public and making authorities aware of the crime scene parameters. When evaluating the scene, investigators take visual note of any evidence, such as blood and the origin of the fire. After investigators have completed with their evaluation of the scene, the guide denotes “Documenting the scene” as the next step in the investigative process.

The NIJ guide states that “After the lead investigator has evaluated the scene, he or she must document the scene.” his entails taking physical notes, taking pictures of the scene, as well as taking videos. This allows the original state of the scene to be stored permanently in the case of any tampering or moving evidence around. Pictures and videos can also be used later in an investigation to scan for clues and evidence that the investigator may have missed on site. Documentation, per the NIJ, may also consist of a written narrative, written observations and descriptions, as well as written speculations regarding the origin of the fire. When putting the pieces together as part of an investigative team, the documentation of evidence can serve as an unbiased roadmap, or resource to refresh the investigator’s memory. After documentation is complete, the penultimate step is processing any evidence contained at the scene.

Prior to processing evidence, the steps in the investigation mainly deal with assessing and document the situation. In the processing stage, the investigator gets hands-on with the scene and physically begins to collect evidence. Within this process, the NIJ states that investigators should “identify, collect and preserve evidence; prevent evidence contamination, package and transport evidence, and establish and maintain the chain of custody.” Identifying, collecting, and preserving the evidence means that investigators have to physically sift through the scene and collect any materials that they deem relevant to the investigation. In the case of an arson, this may be any weapons, explosive devices, matches, or anything else that could give them insight regarding the origins of the fire. In the case of arson, the evidence could lead investigators to determine exactly how an individual started the fire. Preventing the contamination of evidence is important, especially in the case of a fire where evidence may be in a weakened state. Packaging and transporting evidence is the next step, which entails evidence being taken to a secure facility, where it can be analyzed in an environment free of contaminants. Establishing and maintaining the chain of custody involves making sure the evidence is tracked at all times and possession changes are documented. After proceeding with evidence processing, investigators must then complete the scene, which is the next step.

After the scene has been secured, documented, and cleared of all relevant evidence, investigators are then tasked with taking the final steps in their on-site investigation. This includes “Releasing the scene” and “Submitting reports to the appropriate database.” Before they can release the scene, investigators must ensure that they have collected all possible evidence, documented the scene accurately, and remove all materials used as part of the investigation. After the scene has been cleared and released, the final on site task is recording scene information in various databases, such as “Arson and Explosives National Repository, Bomb data Center, National Fire Incident Reporting System, and State and local fire incident reporting systems.” These databases store information that can then be accessed later to further the investigation. After the scene is fully cleared, the fire can then be fully investigated appropriately.