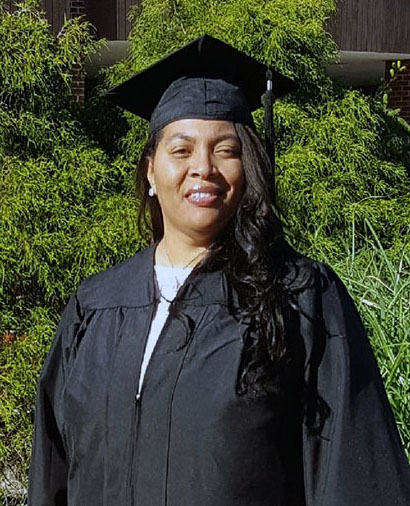 Once a Paralegal Studies major at Villa Julie College, Margaret Boyd-Anderson has since conquered personal battles in the pursuit of furthering her education, promoting justice, and encouraging individuals to work to the best of their abilities.

Margaret earned her associates degree in General Studies from Villa Julie College, and always felt the desire to further her education; however the course of life often takes unexpected turns. Despite a battle with cancer, Margaret’s family served as a strong anchor, which not only drove her to stay physically strong, they also kept her invigorated mentally and spiritually. She notes, “My strong faith in God in addition to the love of my family helped me to stay motivated.” Margaret grew up on a farm, and credits her parents and eldest sister with instilling in her values of respect and selflessness. Though they have passed on, Margaret still reflects on their wise words, saying “I often reflect on their individualized visions of success that they each shared with me.” It was through their guidance she learned to make lemonade when life serves you lemons, which Margaret did indeed do.

Continuing on the course of her education, Margaret enrolled in Stevenson’s Legal Studies program and graduated with her bachelor’s degree in May 2017. She is currently a Project Coordinator for the Criminal Justice Coordinating Council (CJCC). In her role, Margaret is in charge of setting up committees and making recommendations on how to combat criminal justice issues ranging from domestic violence to emergency preparedness planning at the courthouse. While there are issues that arise, such as budget problems, Margaret and the council still get the job done at the end of the day.

Margaret has always had her dream career in mind, saying “At a very young age I realized I wanted to be a lawyer”. Her upbringing contributed to this, because where she grew up, she witnessed a number of injustices and wanted to be able to make things right. Also at a young age, she met a lawyer and who enhanced her interest in seeking justice for victims, and served as a mentor to Margaret. As a senior in high school, she interned as a law clerk in the circuit court, which cultivated her experience in the field. This was fulfilling, because as Margaret puts it, “My heart was always in law.”

Margaret enjoyed her time while in the Legal Studies program, saying, “The faculty made us feel that we had great potential, they really encouraged us that we could get better and improve.” The support system as well as the capstone course made her feel properly equipped with the tools she needed to be an impactful force in the field of law. Additionally, she returned to school with a good deal of life experience prior to her first time, allowing her to truly appreciate the second time more.

Throughout her life, Margaret is constantly learning and growing. She says that one of the most important things she has learned is to truly believe that the system works. She also learned from her boss that it is essential to have an outlet – a way to decompress and let go of the stresses that occur everyday. Her outlets are gardening and bird watching, because she loves nature as well as being outdoors. To those starting out in the law enforcement field, Margaret emphasizes the need for passion. She says “If what you are passionate about is not your full-time job – you should find a way to incorporate it in your life.”

Margaret cites her family as well as strong faith in God as motivating factors in her life. She has received a wealth of knowledge from her family, and often keeps nuggets of wisdom in her mind. This is apparent in her saying “I further reflect on my great aunt Mary Emma Morton’s advice to me, “Never let your brain dry up!” She concludes the conversation by saying “My faith in God continues to sustain me as well as keep me grounded in order to develop and maintain healthy relationships and be a good wife, mother, sister, Stevenson Alumni, and overall good individual.”

Recently, Margaret was contacted by the Stevenson Alumni Board and has been asked to serve as a board member. Margaret says, “I attended the first meeting last month and I am excited to be giving back to the University!”