Forensic Science Student Making a Difference in his Community 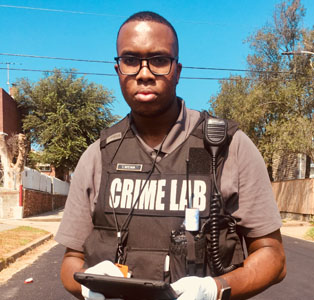 Always interested in science, Ikenna Ikpeama saw an episode of “Forensic Files” and was instantly hooked on forensics. He notes, “Ever since that moment, me and forensics have been inseparable.” Ikenna is currently pursuing his master’s in Forensic Science with Stevenson after earning his bachelor’s in Forensic Biology from Delaware State University.

During his first year at Stevenson, Ikenna was encouraged by Professor Steven O’Dell to attend a criminal justice/forensic science job fair and apply for positions. This ultimately led Ikenna to his current position with the Baltimore City Police Department. In addition to teaching at Stevenson, Steven O’Dell is the Chief of Science and Evidence Management at the Baltimore City Police Department. For Ikenna, the fact that the Stevenson faculty are practitioners in forensics was a huge plus. He explains, “Most of the faculty at Stevenson work in the field of forensics or they know someone who does. They are readily willing and able to place people on the perfect career path.”

As a Crime Laboratory Technician, Ikenna says the most challenging part of his career is working in a place with a high crime rate but notes that this allows him to gain more experience. Ikenna enjoys knowing that he is helping people through his work. Ikenna explains, “I never really realized how much community involvement comes with this job; it really feels like you are making an impact.”

Ikenna believes that to excel in forensics, one needs to be determined, preserve, and have persistence. He says, “Anyone can get trained to do a position in forensics but when you show employers how badly you are interested and want to work in that field they will be more than willing to give a you a shot. Also, it isn’t what you know it’s who you know. Get close to your professors and converse with them [because] you never know who can help you out.”