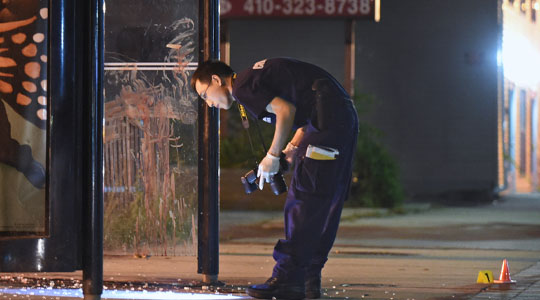 Inspired by a famous forensic scientist, Derrick Hwang’s interest in the field was sparked in high school and remained steadfast throughout his educational journey and career. After earning his bachelor’s degree in Biology with a minor in Global Terrorism Studies from the University of Maryland, he completed his Forensic Science master’s degree with Stevenson University Online. While at Stevenson, Derrick worked as an intern with the Maryland State Police Forensic Sciences Division. Upon graduation, Derrick began working with Baltimore City Police Department Crime Scene Unit as a crime laboratory technician. Since May 2017, he has served with the Anne Arundel County Police Department as an Evidence Coordinator. Derrick notes, “During these past four years, I have had the opportunity to learn from some of the best in the field. Additionally, I’ve testified in 20 different cases within Baltimore City that range from burglaries to homicides.”

Derrick’s interest in forensic science began in high school when he read cases involving Dr. Henry C. Lee, one of the world’s foremost forensic scientists. He explains, “The critical thinking and problem-solving skills that are required to piece together several elements of a crime immediately grabbed my interest.” Throughout his undergraduate studies, Derrick’s interest remained and he gained his first experience in the field through his work as an intern with the Maryland State Police Forensic Sciences Division. This opportunity, provided by one of Stevenson’s faculty, afforded him the chance to gain insight into how a crime laboratory’s quality assurance program is organized.

Before attending Stevenson University Online, Derrick discussed his future goals and career aspirations with the head of the program, Dr. Jay Tobin. Derrick says, “Dr. Tobin emphasized that the Stevenson’s graduate program focuses on honing the students’ critical thinking skills and applying those skills to situations that forensic scientists face on a daily basis. A prime example of this can be seen in the mock trial course, where students must consolidate what they have learned in the program and take the stand as an expert witness. This, in conjunction with the capstone thesis project and practicum rotations, provided me with several transferable skills that jump-started my career in the field of forensic science.”

While interviewing for the position with the Baltimore City and Anne Arundel County Police Departments, Derrick felt prepared to answer questions about his career goals as well as the more technical questions. He notes, “Stevenson’s emphasis on the hard sciences (biology and chemistry) played a pivotal role in the hiring process, due to the fact that forensic science is an application of these hard sciences to the court of law. Additionally, the practicum rotations gave me ample opportunities to network with other forensic scientists and gain a better understanding of how crime laboratories operate.”

When talking about his current position, Derrick notes the challenges and rewards of working as an Evidence Coordinator:

“Due to the inherently chaotic nature of crime scenes, an investigator never really knows what they will face when responding to a call for service. As such, the investigator must possess the ability to methodically identify, document, and recover evidence – regardless of how complex a scene may become. Unlike controlled settings, such as a laboratory, crime scenes are often convoluted and multi-faceted. While there are certainly general guidelines and standard operating procedures that must be followed, there is no ‘one size fits all’ approach to processing a crime scene. With the added factor that every action and decision will later be scrutinized in court, I would say that the most challenging aspect of being a crime scene investigator is maintaining the ability to remain calm and adapt in the face of unpredictable situations.

The most fulfilling aspect of being a crime scene technician or evidence coordinator is finding all of the elements necessary to unlock the story behind a crime. Of course, this requires close cooperation among all parties of an investigation (detectives, medical examiners, state’s attorneys, crime scene technicians, laboratory analytical units, etc.). Although it can be difficult at times to maintain open lines of communication on all fronts, it truly is remarkable when the cooperative efforts of so many people culminate in the revealing of facts that may have otherwise remained hidden.”

Throughout his experiences at Stevenson and in the workplace, Derrick offers that to be successful in the forensic science field, you need to stay sharp. He explains, “You need to always be ready to learn and adapt to your surroundings. Due to the unpredictable nature of criminal activity, you will oftentimes find yourself in situations that you’ve never faced before. During those times, just remember that every new situation you encounter helps to build up your experience in the long run.” He goes on to note that students interested in pursuing forensic science as a career should focus on the “hard science” and to actively search for internships to learn more about the field before graduating.

During his free time, Derrick enjoys spending time with his wife and playing the piano. He is also an avid gamer and recently even started designing his own video game. Derrick says he gains inspiration from the people he surrounds himself with. He notes, “Either work or hobby related, it really makes my day when I see someone doing something that they are passionate about and spreading the same enthusiasm to everyone around them.”