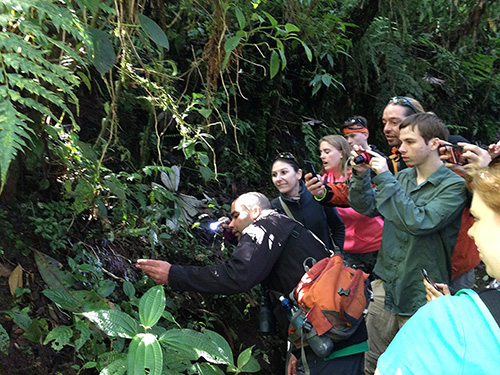 IIE’s Generation Study Abroad seeks to mobilize resources and commitments with the goal of doubling the number of U.S. students studying abroad by the end of the decade.

“Stevenson has a long-standing commitment to integrating academics with experiential learning, of which study abroad is a key component,” said Paul D. Lack, Ph.D., Executive Vice President for Academic Affairs. “The University’s mission as well as the overall Stevenson Educational Experience (SEE) are enhanced by immersion in another culture. We believe that study abroad lends itself to preparing graduates that possess the competence and confidence needed to address creatively the opportunities and problems facing their communities, the nation, and the world.”

(Learn more about study abroad at Stevenson by visiting stevenson.edu/studyabroad.)

Under the new partnership, Stevenson will take concrete, action-oriented steps to expand opportunities for study abroad. The initiative is both timely and appropriate for Stevenson, as the University recently established its Office of International & Off-Campus Study and hired Rebecca Pisano Ph.D., Associate Dean Winterim and Study Abroad, who will work to increase the number of students engaging in an education abroad experience. This intentional, directed effort to support and expand student participation in study abroad is aligned with Stevenson’s commitment to diversity and inclusiveness, promoting broad-mindedness, awareness, and respect as members of the global community. The University’s goal is to send more than 100 students abroad in 2017-2018, a five-fold increase in two years, with even greater numbers planned by the end of the decade.

IIE launched Generation Study Abroad early last year in the belief that the number and proportion of today’s students who graduate with an educational experience abroad is far too low. Currently, fewer than 10 percent of all U.S. college students study abroad at some point in their academic career, according to the Open Doors Report on International and Educational Exchange published by IIE with support from the U.S. Department of State’s Bureau of Educational and Cultural Affairs. Generation Study Abroad aims to grow participation in study abroad so that the annual total reported will reach 600,000 by the end of the decade.

“Globalization has changed the way the world works, and employers are increasingly looking for workers who have international skills and expertise,” says Dr. Allan Goodman, President of IIE. “Studying abroad must be viewed as an essential component of a college degree and critical to preparing future leaders.”