Stevenson President Kevin J. Manning Named One of Maryland’s Most Admired CEOs by The Daily Record 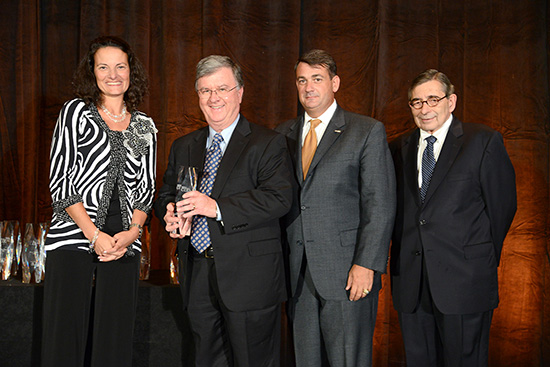 Kevin J. Manning, Ph.D., President of Stevenson University, was one of 30 top local leaders to be named “2014 Maryland’s Most Admired CEOs” by The Daily Record. Manning was recognized during an awards ceremony Thursday, September 18, at the BWI Hilton.

“Being named a ‘Most Admired CEO’ takes more than in-depth knowledge about running a company or organization. It requires an extraordinary level of drive and ambition because it is a tremendously challenging job,” said Suzanne Fischer-Huettner, Publisher of The Daily Record. “They have learned the value of surrounding themselves with great team members, with leaders and employees who believe in the organization’s core values and mission. We at The Daily Record are honored to recognize these inspiring individuals.”

The Daily Record launched its “Most Admired CEOs” program in 2012 in order to seek out and recognize remarkable business and nonprofit leaders in the state. Nominations for the award were solicited from the public, and winners were chosen by a panel of eight past Most Admired CEOs honorees and a representative of The Daily Record. Nominees were judged on their professional experience, community involvement, and commitment to inspiring change.

“I am humbled by this honor and feel privileged to be named to a group with so many of the region’s foremost leaders,” Manning said. “I have strived to make an impact at Stevenson, and in the surrounding community, however none of that could be possible without the dedicated support team I have around me. This award is a testament to them as well.”