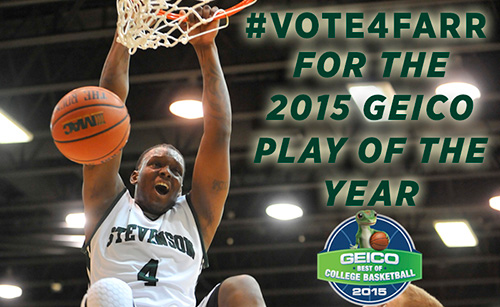 Intersport announced today that Stevenson men’s basketball junior Sean Farr has been nominated for the GEICO Play of the Year. Farr’s alley-oop slam off a one-bounce outlet pass from 70-feet from senior Justin Kuntz came in the team’s 74-58 victory over Arcadia on January 31.

The winner will be announced during the GEICO Best of College Basketball special which airs March 28 at 2 p.m., Eastern time on CBS.

To watch the play and vote, visit: http://bit.ly/1zgYTgI. (To vote, you will need to use Facebook and grant access to your public profile.) Fans can also share their vote with Facebook friends. Voting is open now and ends Monday, February 16 at 11:59 a.m., Central time.

Farr’s alley-oop slam is competing against three other plays from week three, including another alley-oop slam by Southern Vermont’s Dolapo Olugbile, a buzzer-beater by Piedmont’s Trae Gaines and an off-the-backboard slam by Bluefield State’s Dajon Reno.