“Light Up the Sky” Debuts Nov. 13 at Stevenson University 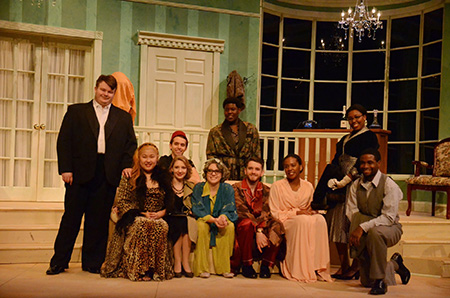 Stevenson University’s Theatre and Media Performance program presents Light Up the Sky, a 1940s comedy written by Moss Hart and directed by Linda Chambers, Adjunct Instructor of Theatre. Performances will take place at 7 p.m. Nov.13-15 and Nov. 19-22, as well as at 2 p.m. on Sunday, Nov. 16 at Stevenson’s Inscape Theatre, located on the University’s Greenspring campus, 1525 Greenspring Valley Road, Stevenson, MD 21153.

Tickets are $10 for general admission, $6 for seniors, and $5 for students. To purchase tickets, please call the Stevenson University Box Office at 443-334-2618.

Essentially a play about putting on a play, Light Up the Sky revolves around a group of New York theatre folk who attend the opening of their new play in Boston and features multiple hilarious plot twists.

“Light Up the Sky is a comedy, with quirky, funny characters. But, as amusing as they are, the characters are real, and that’s what makes the play great,” Chambers said. “We have a terrific ensemble of 10 actors who have been working hard for weeks.”