Institutions Across the Country Aim to Improve STEM Teaching 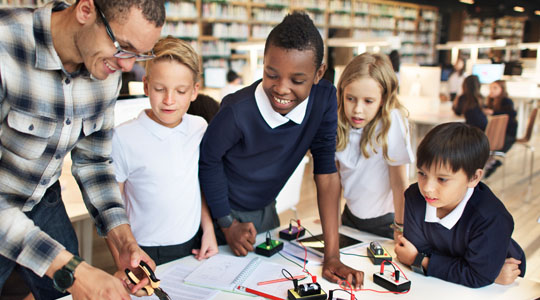 In the past decade, there has been an exponential increase in STEM (Science, Technology, Engineering and Mathematics)-centered careers. The global economy has demanded an influx of interest in these subjects, and consequently, they have become an ever-growing fixture in our school system. Recently, however, it has been discovered that some STEM educators may need more training in order to effectively teach their students.

According to a recent study published by the American Association for the Advancement of Science, STEM classes are mostly taught using lectures. As the article notes, studies have shown lectures are less effective than other methods of teaching when it comes to these subjects. In Georgia Wieland-Stanford’s article regarding the study, it was revealed that she and her colleagues observed over 2,000 STEM classes and over 500 STEM faculty members. In those observed courses, Stains and her team identified 12 common teaching behaviors that occurred in STEM classrooms. Based on their observations, Stains and her colleagues identified three broad instructional styles: didactic, interactive, and student-centered. Stains and her colleagues determined that the didactic style was by far the most common style observed in their research. Regardless of class size or environment – lecturing was the dominant practice observed in undergraduate STEM courses.

Following the revelation that many schools are teaching courses to their top-tier students in this inefficient manner, many institutions are reevaluating their instructional methods. Some universities, are already taking steps to change their respective curriculums in an effort to better meet the needs of their learners. According to the Association of American Universities, for example, the University of North Carolina at Chapel Hill has been taking action to ensure STEM classes are more engaging and effective, and has also created several STEM Education Initiatives in an effort to boost awareness to these recent findings And, per Scott Jaschik’s article in Times Higher Education, some professors, such as Harvard University’s Eric Mazur, have developed approaches to make their classes more engaging. Mazur begins the technique with “clicker-style” questions. If some students appear not to be understanding the material, he does not explain it himself. Instead, he asks students to talk among themselves in small groups and then asks his question again. This moves the class away from the lecture method, and instead, the students learn from one another.

Now that this issue is being addressed at universities across the country, well-qualified candidates are set to see an influx of opportunities, especially at the elementary and secondary levels in order to prepare students for college. Stevenson University Online’s Master of Arts in Teaching program is designed for math and science baccalaureate degree graduates who possess a desire to teach and a passion for inspiring a new generation of learners. Additionally, Stevenson offers a Secondary STEM Teaching & Learning Post-Baccalaureate Certificate for current middle or high school math and science teachers who want to expand their knowledge and practice of inquiry-based collaborative teaching and learning.