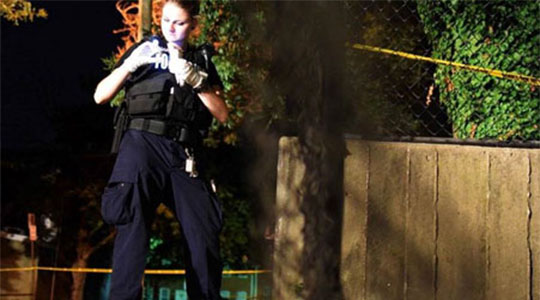 Erika Harden looks forward to going to work every day with the possibility of learning something new. By enrolling in Stevenson University’s Bachelor’s to Master’s Option, she transformed her childhood passion for science into a fulfilling career in forensic science. Erika graduated from Stevenson with a B.S. in Chemistry in 2014 and a M.S. in Forensic Science with a concentration in Crime Scene Investigation in 2015. Through the Bachelor’s to Master’s Option, she was able to enroll in graduate courses as early as her junior year. Following graduation, she worked for two and a half years as a Crime Laboratory Technician with the Baltimore City Police Department. Now, Erika works as a Crime Scene Technician II with the Evidence Collection Unit of the Anne Arundel County Police Department. Erika also serves as an adjunct instructor in Stevenson’s Forensic Science program, becoming the fourth graduate of the program to return in a teaching capacity.

As a crime scene technician, Erika is responsible for responding to crime scenes to document, recover, and process physical evidence in relation to criminal activity. The documentation process involves filling out reports, taking notes, and collecting photographs, sketches, and 3D scans. She reports to crime scenes involving cases such as burglaries, assaults, shootings, and homicides. Erika believes that, “crime scene investigators and forensic science are sometimes overlooked. It is not nearly as glamorous as they portray on the TV shows, but it is still a very vital part of the justice system. The evidence we recover can help tell a victim’s story and find the person responsible or even exonerate an innocent party.”

Erika was drawn to forensics because there is so much to learn and discover. At Stevenson, she was able to learn from professors that share this passion and are experts in the field. Erika received a personalized educational experience tailored to fit her career goals. She explains, “I didn’t want to be a number in a classroom of 300+ students, I wanted to be a person with a name. The professors become more invested in your success when they know you personally and I think that helped me make connections and strive to be more successful. They work with you and genuinely want to help you succeed.” Through her coursework at Stevenson, Erika was given the opportunity to learn in a hands-on environment. Her research thesis has even been used as a reference for policy changes in Baltimore City.

While processing crime scenes can be very demanding, Erika loves her job and is amazed at the constant improvements being made in the evolving forensic science field. She notes, “I am drawn to forensics because of how young the science is. There have been so many advances in the past couple decades and there is still so much to learn and techniques to discover.”