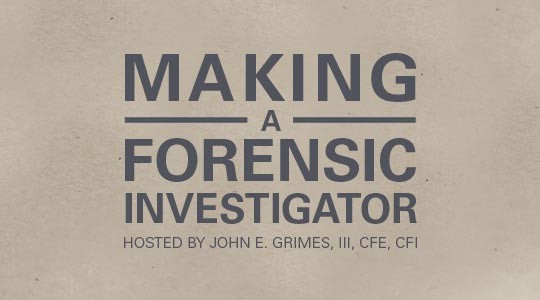 Presenting Stevenson University Online’s first webinar Making a Forensic Investigator is Forensic Studies Adjunct Instructor John Grimes, III. We had the opportunity to speak with him about his 45 plus years of experience in law enforcement, criminal investigation, fraud examination, and loss prevention.

My law enforcement career began when I was 18 years old when I joined the Baltimore City Police Department as a Police Cadet. After graduating from the Academy, I was assigned to the Northwest District as a Patrol Officer. At the age of 23, I was promoted to Detective in the Criminal Investigation Division. I left Baltimore City to work for the Amtrak Police Department as a Special Agent in the Fraud and Organized Crime Unit Captain of the Criminal Investigations Division. In 1993, I joined the Amtrak Office of Inspector General and retired from there in 2011 as the Chief Inspector of the Office of Investigations. After retiring, I have kept busy as an Adjunct Instructor of Forensic Studies at Stevenson University’s School of Graduate and Professional Studies as well as a fraud examination and loss prevention consultant, trainer, and speaker.

There were many challenges I faced during my law enforcement career. As a Patrol Officer and Detective with Baltimore City, the biggest challenge was preventing myself from becoming a cynic. When you are constantly seeing and working with people at their worst, it can easily happen. Later, as a Fraud Investigator with the Amtrak Police Department Fraud and Organized Crime Unit, then with the Office of Inspector General, the most challenging aspect was working with top level executives who viewed fraud as a part of the cost of doing business and were reluctant to address the root cause of the problem.

Along with the challenges however, come the rewards. During my career as a police officer and detective, I was rewarded by assisting people in need and doing my part to keep the streets of Baltimore safe for innocent citizens. As a fraud investigator, I found great fulfillment from successfully resolving complex fraud cases and helping organizations correct practices that prevented them from being exploited by fraud hazards. Then as a supervisor and leader, I felt a great sense of accomplishment in imparting my knowledge and experience to others.

To be a successful forensic investigator, one must be a healthy skeptic (versus a cynic) and have the ability to think critically and communicate effectively. Forensic investigators should possess an unimpeachable degree of integrity and understand what motivates people, especially when it comes to what drives them to make “wrong” choices. A desire to solve complex problems helps too. Lastly, it is vital as an investigator to keep abreast of rules, regulations, laws, public opinion, and investigative methods.

Throughout all of my experiences, I have learned to keep moving forward and never stop learning. In my spare time, I read a lot. I have also started writing two books, one focusing on the craft of forensic interviewing and the other is a fiction thriller. Additionally, I play the guitar and piano – in fact, I am a member of the Piano Technician’s Guild and perform piano tuning. Sometimes I dabble with other instruments, including the bagpipes. When I’m not at home, I enjoying camping with my dog. I love dogs and have had them throughout my whole life.

My favorite place that I have traveled to is Ireland, the land of my ancestors. I feel like I belong there. It is a beautiful country, the people are friendly and funny – and it’s the birthplace of Guinness! I was and still am inspired by my father. He was good man, served in the United States Navy for 32 years and was an exceptional role model. All he expected from me was to be a good man. In historical terms, I am inspired by Winston Churchill, Abraham Lincoln, Nelson Mandela, and Martin Luther King, Jr. They all faced insurmountable challenges, but stayed the course. Lastly, I am inspired by my wife and daughters. They are smart, good, and loving. I am constantly learning form from them (or at least they are constantly instructing me what to do).