Landscape History in an Urban Environment 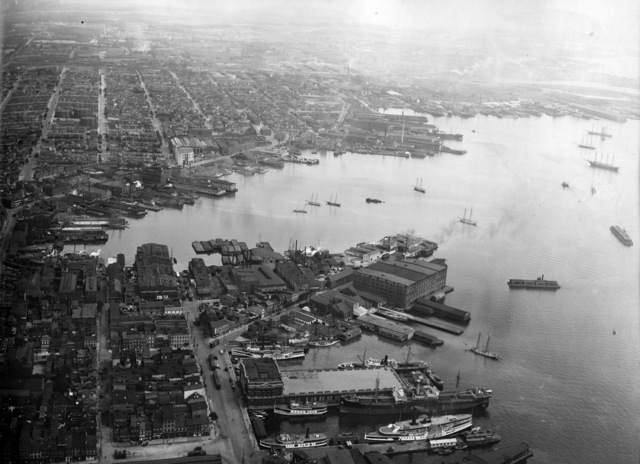 An aerial view of Fells Point’s “Recreation Pier” from 1922- later made famous in the 1990s television program Homicide–Life on the Street.

Baltimore Harbor’s changing historical landscape is the theme of the Stevenson University Public History Program’s latest experiential learning project. In 1923, the Harbor Board of the City of Baltimore published a photo atlas entitled Aeroplane Views of Baltimore Harbor and Approaches. It was unique for its day because it was composed of 67 air photos that were shot by the US Navy’s nascent aviation branch. Under the command of Admiral William A Moffett, known as the “Father of Naval Aviation,” Navy aircraft photographed the Lower Patapsco River and its approaches to Baltimore Harbor using biplanes and huge handheld cameras. Those 67 airphotos became the content of the Harbor Board’s book. Few copies of that book still exist.

The Inner Harbor–Light Street to left.

Recently, the Stevenson University Archives were pleased to receive a donated collection that contained an original copy of that hard to find book. We in the archives were elated since we could only find four research libraries in the world whose catalog reflected that Harbor Board publication. However, unbeknownst to us, the collection, a gift from Stevenson University Trustee Nancy Hubble, had even greater secrets to reveal to Stevenson’s Public History majors who operate the archives. As the students were accessioning the collection, they were astounded to discover all of the book’s original 67 air photos. High quality photos, the black & white images were each mounted on cloth backing gathered in a photo album. Each image captured life in the harbor area from 1922. An instant –frozen in time.

Baltimore’s Domino Sugar plant operating, but without its iconic sign, and still under construction.

Stevenson’s Public History Program realized it had in its possession a rich trove of historical data, and, consequently, it moved ahead with what has become known as the Baltimore Historic Harborscape Project . The first step was was to digitize the photos to the archival standard of 1200 dpi (dots per inch). The project’s second step was to examine and analyze the high definition images using standard digital photo software. The results were amazing. Each of the photos yielded significant historic data regarding life in the harbor area. Our students were surprised to learn that roughly 25% of transport along the city’s streets was horsedrawn, and that nearly 50% of the boats were driven by sail. Small groups of people are seen waiting at trolley car stops, and gathering outside of saloons and taverns. Fort McHenry appears with all of its temporary barracks and medical facilities as a result of its use in WWI, and Chesapeake Bay Line sidewheelers with their steam “walking beam” engines await passengers at their wharves. Commercial advertising adorns walls, and atop the Emerson Bromo-Seltzer Tower can be seen its revolving 51 foot, 18 ton, cobalt blue Bromo-Seltzer bottle. For the next several years our majors will be analyzing the photos to extract as much important historical data as possible.

In front of the Domino Sugar Plant a horse drawn landau carriage turns onto the street, a pedestrian steps off the curb, and three people lean against the gatehouse awaiting rides.

The project’s third phase is to team with an organization to recreate the 67 photos today. That will require determining location, altitude, and angle from which each of the original images was shot, field of view of the lens used, as well as a multitude of other technical details which, once determined, can allow a modern image mission to be flown capturing the view of what is at these locations today.

The fourth phase of the project will entail an analysis of the differences between the scenes in each “then-now” image pair in order to determine change over time, and, using an interdisciplinary approach, interpretations explaining that change or lack of change.

In each of the phases of the project, products are developed that help illustrate how collections such as these are crucial to our understanding of how we got to be where we are today. It’s rare that an archive is operated by public history students, but in the case of Stevenson University it has become the backbone of our program. Projects like this illustrate the wisdom of archives and public history programs developing strong ties in order to both preserve and interpret our past so that we can better understand our future.

Our objective is to have completed our task and published our results in time for the 100th anniversary of the publication of Aeroplane Views of Baltimore Harbor and Approaches.