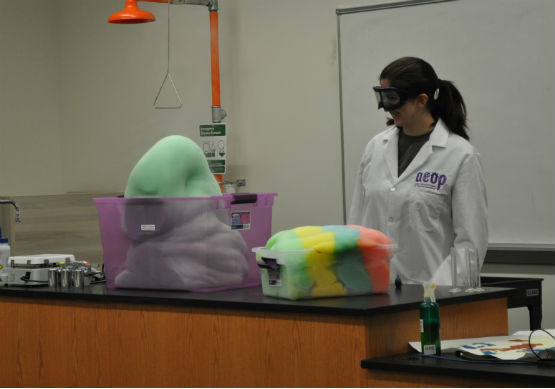 The annual Chemistry Magic Show was held this week in the Manning Academic Center. The American Chemical Society Student Club presented cool science demonstrations for student in any major to experience awesome chemistry in action.

The club also participates in the Maryland STEM festival and will be having an encore performance of the ACS Magic Show for the pubic on Friday, November 10th at 2 pm. Later that day, another STEM festival event will be held at Stevenson: Mathstravaganza, November 10th at 3-5 pm. The event will include several interactive math exhibits and games which will be accessible to all ages and mathematical backgrounds. Some of the interactive exhibits include a giant Tower of Hanoi mathematical puzzle, the Chaos Game fractal generator, a station to create minimal surfaces with soap bubbles, a Prisoner’s Dilemma simulation, and the Monty Hall Problem probability game.​ Please join us on the Main concourse in the Manning Academic Center on Owings Mills North.